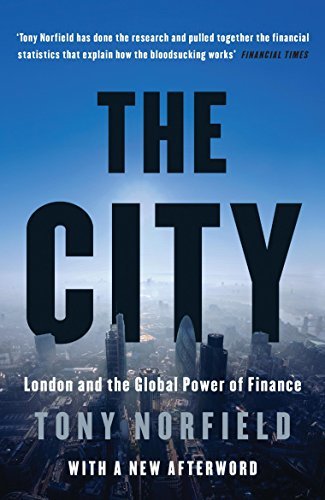 The City: London and the Global Power of Finance

The City, as London’s financial centre is known, is the world’s biggest international banking and foreign exchange market, shaping the development of global capital. It is also, as this groundbreaking book reveals, a crucial part of the mechanism of power in the world economy.

Based on the author’s twenty years’ experience of City dealing rooms, The City is an in-depth look at world markets and revenues that exposes how this mechanism works. All big international companies—not just the banks—utilise this system, and The City shows how the operations of the City of London are critical both for British capitalism and for world finance.

Tony Norfield details, with shocking and insightful research, the role of the US dollar in global trading, the network of Britishlinked tax havens, the flows of finance around the world and the system of power built upon financial securities. Why do just fifty companies now have control of a large share of world economic production? The City explains how this situation came about, examining the history of the world economy from the postwar period to the present day.

If you imagine you don’t like “finance” but have no problem with the capitalist market system, think again: it turns out the two cannot be separated.